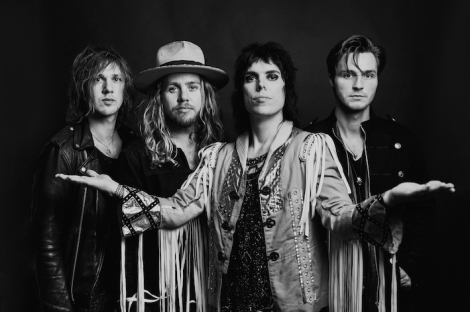 Founded in 2012, The Struts are a successful English (glam) rock band with origins in Derby. The bands’ name is based on a comment of someone made at a rehearsal, who described Lukes’ movements as “you strut around a lot”. So here they are: The Struts!
Vocalist Luke Spiller, guitar player Adam Slack, drummer Gethin Davis and bassist Jed Elliott are currently doing a big US/UK/Europe tour. entertaim.net had the pleasure to meet them in Cologne a few hours before their show at Buergerhaus Stollwerck. After we could gain a quick glance at the stage preparations, Luke gave us half an hour of his spare time to talk to him backstage. Of course he was wearing his special fur jacket….

First, we went back in history. In 2014 Luke was given the chance to do vocals for one song on Mike Oldfield’s album “Man on the rocks”, simply because Mike loved Luke’s voice. He ended up doing the whole album main vocals instead of doing just one song. Later he met Mike during the recordings and they spent a great time together in Mike’s house after the album was out.

We wanted to know the reason why The Struts moved from the UK to the US in 2015. After touring France and supporting the Rolling Stones they got a nice offer from the US. So they didn’t exactly move, but they sort of left the UK, being mainly in the US and on tour. Adam is the only one who owns a house in Derby. Luke himself sometimes visits his parents in England. But, according to him: “Home is where I charge my phone”.

The Struts had a great time being the supporting band for not only the Rolling Stones but also for Guns’ N’ Roses, Foo Fighters, Black Sabbath and The Who. Luke is e.g. very fond of Dave Grohl. But: nothing compares to be the headliner on your own show. He loves to be with his audience. Loving his fans, he wants to get in touch with them and to have the crowd for his band and himself.

As Luke seemed to be quite tired we got into the reasons. The Paris show the night before was the biggest one of the tour so far, Luke described it as monumental. Paris always has been like a home base for the band – that’s where they managed to have their first exciting breakthrough success. And than, there was the nightliner journey from Paris to Cologne. Despite their success, Luke tries to avoid the rock star cliches, so he usually won’t drink any alcohol on tour. But as a rare exception, he was out the whole last night with the one and only Kyle Falconer (from “The View”). The scottish guy is notorious for heavy drinking and more – not avoiding any cliche… so no wonder about Luke longing for an afternoon nip. Kyle did the openings of the UK-shows and lucky enough The Struts management offered him a support slot for Europe also. Simply because there’s a free bed in the tour bus…

We were curious about Luke’s special ability and his motivation to pronounce his “rolling R”. When he was younger, he watched the musical “Joseph and the Amazing Technicolor Dreamcoat” by Andrew Lloyd Webber. Jason Donovan was featured in the original cast. Back then, Luke listened to the album over and over. From the song “Joseph’s coat” he was impressed by the line: “Joseph’s mother, she was quite my favorite wife, I never rrrreally loved another all my life”. After founding The Struts, he remembered this special way to sing the “RRRR” and occasionally he uses it in his songs.

Of course we asked him about his ideas for new lyrics. So far, his topics are the modern way of life, communication, relationships and the music business. Being on tour, Luke is far too busy to write, but back home he takes his time. Some of his results come from watching television. He loves documentaries, especially the ones about music and he gets a kick out of them. His lyrics sometimes feature characters, e.g. in “Body Talks” and “Primadonna Like Me”. Inspiration is always around – the latter was created in the toilet: in their L.A. home he came off it with the idea for the chorus! His band mates are naturally integrated in the songwriting process, but in the end, he’s mainly responsible for the lyrics, since the singer must relate to it and believe in it.

There’s an interesting connection between US hype rockers Greta van Fleet and The Struts: Rolling Stone mentioned both together recently as part of an new rock era. GVF has a huge fan basis, but actually some critics also, describing them as Led Zep clones. For Mr. Spiller it’s difficult to compare GFV to The Struts for many reasons – but he very much appreciates their potential to bring young people to rock music again and he especially admires their big riffs.

Regarding the fan’s age for Luke it’s usually very widespread. But funny enough, at one show in “the middle of nowhere” in the US the youngest guests were about 40 years old! And even though Luke appreciates the “older” ones coming around, he likes the raw energy from the younger fans bringing the jumping and shouting to the shows, what he – as a dedicated fan of AC/DC – always loves.

Concerning their future plans he told us that of course there’s gonna be new music around. Getting new songs out for him it’s not the question of doing it as an album necessarly. Maybe they’ll decide to promote them as singles and videos rather than an album. As The Struts have shown their special talent for unique videos (see e.g. the recent one “Tatler Magazine”), we wondered if they are into shooting any real movies or in making a movie soundtrack. But for him that wouldn’t be the way – instead, he actually carries the idea of writing and doing a musical!

We really enjoyed talking to Luke, he is such a fantastic and talented, inspiring guy. The sold out show (what else?) a few hours later just blew us away, a manifestation of all the promises we demand in rock’n’roll. What an energetic, thrilling way to deliver their music to the party crowd. Purest rock’n’roll energy, woven in hooks and choruses, every band would surely die for – and often arranged with a Queen-like approach to reach for the maximum of hysteria. That’s why Luke often is seen as a new Freddie Mercury. No question: The Struts are on their way to be true rock’n’roll stars, soon with bigger arenas ahead to fill….