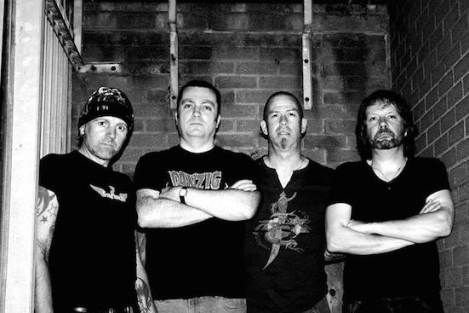 Baleful Creed is a four-piece band from Belfast, founded 2009, with classic rock influences from e.g. Black Sabbath and Danzig. They produce strong, heavy, grooving, catchy tracks. Once you start to hear them you might get addicted to hear them more and more…. Their lyrics let you think about human behaviour in modern times.
Members are Greg ‚Fin‘ Finlay – Vocals/Guitar, John Allen – Guitar, Davy Greer – Bass/Vocals, Dave Jeffers – Drums. One EP (Killing Time) and two LPs (Baleful Creed and Seismic Shifter) are available. Also, pretty much merchandise stuff as shirts, beanies, caps, hoodies and so on – in the rock scene John Allen is famous for his creativity and activities in this area. And if you order an item you will get a nice personal note sent with.

During a trip to Belfast entertaim.net was able to speak to drummer Dave Jeffers, while drinking Rockshore Lager and Guinness in one of Belfast’s well-known music locations, „The Empire“. A very nice and funny guy! We talked about politics and history – which is extremely visible in Belfast! The huge and somehow incomprehensible “peace walls” are still there, dividing the city into different parts and, as Dave said, they are still necessary and wanted by the people living there  – it’s kind of an irrational conflict, because it roots so deep in history and religion. You must see the peace walls and talk to the people, to get a picture of what’s going on in Northern Ireland… We talked also about cycling in Ireland and music in general and our personal musical experiences, and of course we got a bit into the band details and received some information from Dave about the current state and the plans of the band. Though the Northern Ireland accent was not that easy to get, we enjoyed talking to him very much.

So that’s the news: Baleful Creed’s third album is to be expected next year – they have already recorded 6 new songs.
They are attending many gigs and festivals in Northern Ireland, Republic of Ireland and the british „mainland“. So they went to the „Loverocks“-festival in Bournemouth in June 2019 with many other current rock bands on stage and thousands of visitors. There the Baleful Creed members met the members of Dublin’s famous rock band „Samarkind“ for the first time, until then they did know each other – only via social media. Very nice guys, Dave said. We asked Dave about his opinion of the „NWOCR“ (New Wave of Classic Rock)-movement, which is spreading it’s wings. The term was first used by Jeremy Wills, one of the administrators of the so titled facebook-group with more than 10.000 members. Dave thinks it’s good and helpful for the bands and their efforts to getting connected with each other and known in the music scene.
What’s quite unique: Baleful Creed still doesn’t have a label, they appreciate the advantages of their independency. It seems that this way works for the band!
More festivals (e.g. „Winter’s End“) and gigs are to come and just now they can celebrate their 10 years anniversary.
It was great talking to Dave and we wish the band all the best and hope they’ll be able to tour Europe soon. And of course, we are looking forward to the new album….

Chrissie and Martin , pic by courtesy of Baleful Creed