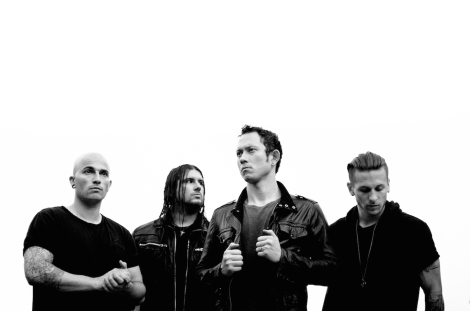 American band TRIVIUM is one of the best known metal core acts around, with a great album history and a big tour history in Europe and Germany. Right before their Cologne gig at Live Music Hall, we talked to guitarist Corey Beaulieu about the tour, politics, social issue, a mad gone world and drummers.

Interview by Martin Hannig / Photo by courtesy of Oktober Promotion.

entertaim.net: Corey, after 15 years in the band constantly playing and touring –  do you still have enough energy to do it?

Corey: Well that’s what we do. We know what kind of show we wanna put on so we prepared for it. We have so much experience on the road so we can manage our days and get a routine going on. People are expecting a certain type of show, and so do we. When you are in front of an exciting and energetic crowd that pretty much gets our adrenalin going! So it’s just fun and we have a good time. We know how to survive a tour! (laughs).

entertaim.net: I read in the tour schedule sometimes you have one day off. What you are doing in those times?

Corey: We use to go out and find some nice local restaurant to have a good dinner and some local beers.  A lot of the time we just getting some extra rest, or some walk around the city and checking stuff out.

entertaim.net: Is there a real chance to think about new music in those extra times, or to discuss ideas about new songs?

Corey: We don’t write on tour. But we get ideas to put ‘em in the idea bag. We are always thinking of stuff we’re gonna do next. Like we’ve been to museums and stuff to get some ideas. So we see pictures there, maybe as an inspiration for an album cover or a t-shirt, something we can use for the visual side of things. Something can spark like lyric ideas or you  might get a riff in your head. Certain things subconsciously get in your brain when you travel round, when you pick up your guitar. Ideas you wouldn’t had at home. We don’t force ourselves to write on tour, we just enjoy what we are doing. But it helps to collect ideas. When you think about new music you may use that ideas.

entertaim.net: Do you feel some kind of pressure to bring out new music in a quite short time ?

Corey: Depending on hew the record was received.  We’ve been on tour for this record since August 2015. We had the US tour and then we had 4 months off before we started this. We build in some breaks, so it’s not like tour after tour. In our band we have 3 people to write songs, so when it comes down to make a record, you don’t have the weight of a whole record to write by yourself alone.  You can focus on 2 or 3 good song ideas, to make those the best. The other guys do the same. And we collaborating and writing together and we get the jamming. As long as we have a couple of weeks to just go and jam every day, and mess around with ideas, we can turn a record around pretty quick! We always got riffs and stuff. The lyrics and vocal melodies takes a little longer. There’s a lot you gotta do for a whole record, but we can work pretty quick.

entertaim.net: Let’s talk about politics and art. There are a lot of artists out there saying “I don’t want to discuss any politicial issues. That’s my private opinion. I am just delivering pictures, or paintings or songs.” What do you think about artists giving a political expression toward the fans?

Corey: We’ve never had anything political in our music. But we have a lot of songs talking about social issues, like equality of everyone, or domestic violence, child abuse. We just leave it like that, we don’t have political stuff like the current presidency. We want our fans to listen to us regardless what their opinions are about current events or different political agendas. You can have a Trump supporter and a non Trump supporter, they can have their arguments, but in the end they are Trivium fans. With a lot of stuff you can really divide people. They are very passionate about it, totally in their right to express whatever they feel. I don’t really get too much in the politics. If someone try to debate me on something, I just stick to talk about music! That’s my life. On social media for me it’s always about music I’m listening to, hopefully turn people to some really cool new bands around. I just try to keep it like that.

entertaim.net: Do you concern about going to Europe? There’s always a few bands saying “Europe too dangerous to play”. You know – London assault yesterday….

Corey: Ah no we love comin to Europe! We have amazing fans all over Europe! You know no matter where you go – shit happening everywhere. Like attack people in Orlando. We’ve been to  Sweden and one said “it’s a war zone over there, don’t go there!” – and I: “No, no not at all. I’m having a beer. It’s perfect!” (laughs). Some people are in their little bubble. They just see the news but they never been here. We travel all around the world and we always had a good time. It’s not like a war zone all over Europe. Stuff happens in America all the time, stuff happens here. Just enjoy your life, don’t live in fear. The best thing for us is to travel all around the world, to see different cultures, and how other people live outside our neighbourhood or cities.  You have a different perspective on everything. We kind of see it on a world view, instead of staying at home and judging. It’s really great to have that experience to meet people from all walks of life, different countries, different religions, whatever. A nice person is a nice person.

entertaim.net: How do you came to learn the guitar in your childhood? At what age did you start to play?

Corey: At 14. I was hearing music from my sister and my parents,  but I never was interested in that stuff. Somehow my parents ended up getting “Use your illusions 1 & 2”. I don’t think they liked it. It was such big records when it came out! Everyone who listened to music ended up checkin it out. It definitely peaked my interest in rock and metal. I was air guitaring on a tennis racket like Slash. I was interested  in playing guitar and my parents challenged me to test it if I was actually serious enough about it.  Once I heard Metallica it really kind of jumpstarted me. Compared to Guns n Roses Metallica have these big heavy riffs. Guns n Roses are lot more rocknroll blues orientated . I pretty love Guns n Roses but when I heard – I think it was fucking Master Of Puppets… it just really grab me, I was super interested to play like that. It was music that set me down the path. That kind of riffs and that kind of sound. Then each band would lead me to anther band.

entertaim.net: Did you have lessons as teenager?

Corey: Yea I took lessons for a few years until I graduated. I definitely taught myself a lot by learning other peoples songs and listening to different styles of music and different guitar players. Now, when I hear a song and I’m curious about how he plays that song – you know nowadays the internet is full of shit. There’s so many lessons sites and DVD you can buy,  much information for a 14 year old kid today. You have the world of guitar knowledge at your fingertips, you don’t need to go to a music store to buy sheet music or a tab book. I like going online and finding guitar players I don’t know who are amazing. It’s great, you just soak up the knowledge. But there’s so much, you gotta be focused.

entertaim.net: Is there something going on in Trivium leading to a new album maybe in 2017?

Corey: Tomorrow will be the last gig and then we gonna take some time off to get home, and recharge. We will start discussing what our game plan is. Moving forward and when we start kicking though the ideas. What kind of record we wanna make. So we have to wait a while before there’s anything to talk about. Obviously we gonna do another record!

entertaim.net: Obviously! There’s some discussing going on on your facebook page about the drummer thing. Some people seem to be pissed off and say you didn’t have any respect for your drummers.

Corey: They can kiss my ass. You know being a band at our level it’s like a business. You hire someone to do a job and you pay them. With any kind of work you do, if you can’t do the job why should you be payed. Unfortunately – we don’t like changing drummers. It’s a pain in the ass to get people learn the whole setlist. We don’t wanna keep playing not giving the 100% best we can sound for our fans. We just decided to kind of move on. Obviously we didn’t find the right fit you know. But also with the fans: they don’t have to deal with it. It’s our thing. We are 3 people that have been writing all the songs for all the records. The vison is still there. The drummer we are playing with on this tour we are really really happy with. He has been killing it every night. He’s got skills to cover our whole catalogue. You know there’s other bands having way more line up changes than we have.

entertaim.net: Yeah look at Deep Purple in those earlier times…

Corey: Yeah Deep Purple and others had tons of line up changes in a quite short time. We have only one position that we have an issue with and 3 of us have been in the band the whole time. When you are the one to be in charge you gotta make the decisions. Sometimes you will be put in a situation you have to make a tough decision. We’ve been given the people multiple chances to prove themselves. It’s not like: something happens and then you’re fired. Sometimes it just doesn’t work out. You have to move on and hope the next person can be that guy.

entertaim.net: Did you ever thought 15 years ago that Trivium would last that long?

Corey: Hopefully. We’ve been fortunate to have supporters over all these years. We keep trying to make the best music we can. And people keep listening. We’ve seen a lot of bands came up the same time with us or started right before us. Rose and fell and broke up. And we keep pluggin away. It’s nice! If we wouldn’t do this I have no clue what to do else. I’ve been doing this for so long, like make a record, tour, make a record, tour. Keep playing. There’s still a lot of room to grow. And continue to build and reach new fans. We are still super excited and super happy. Our job is to play and make music. And when we’re not on tour our job is to write songs.

entertaim.net: Your last name sounds French … do you have french parents ?

entertaim.net: Okay so have a good gig tonight! All the best!