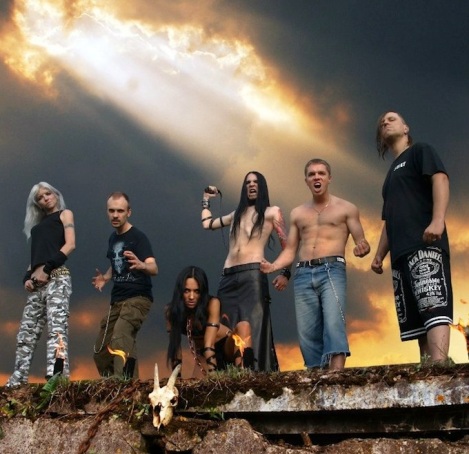 They call it Sex Metal, whatever it is … so ENTERTAIM.NET spoke to Kaira herself, exotic leadsinger of Russian Metal band KAIRA:

entertaim.net: I heard you’ve got another new album in progress. Do you have a release date ? Do you have a distribution and promotion partner in Germany yet?

Kaira: Yes, you are certainly right! While working on new songs at a studio,  new lyrics and melodies appear and they all are different. We don’t have the release date yet because of the work in shooting new song videos and at the same time because of recording new tracks. As you know we released ‘Not For Angels’ at German company Record Jet in February 2013. But still we can’t find a good promoter, you know, it’s very hard to find a good one.

entertaim.net: Is there any chance for you to play some shows in Western Europe?

Kaira: You know, we planned to cooperate with Victor Smolsky (RAGE) and run a West European Tour, but unfortunately it appeared very hard to find reliable sponsors within our country. That is why we stand in need of a professional manager who will do the work right and will manage the tour in Europe.

entertaim.net: You call your music style „Gothic / Sex Metal“. What’s Sex Metal and do you have excessive and extraordinary live shows?

Kaira: Yes, Sex Metal for us is like a flag that we are carrying from the beginning inspite of the fact that we play groove metalcore now. Sex Metal is the way I feel, and I convey in the lyrics, trying to point people’s sexual essence and inseparability with Heavy Metal, and of course the actions and performance at the stage are important. Well, you can feel Sex Metal only at our live performances because you feel the emotions that appear only in touch with public mostly.

entertaim.net: Lots of German bands, especially traditional Metal and Gothic, like to play in Russia. What’s the special thing about Russian metal heads?

Kaira: It was earlier, now in Russia there is a difficult situation for Heavy Metal bands from any countries, the financial crisis was a big trouble for Russian metal scene. Many agents ended their activity at all, it is connected with the lack of money, people’s financial position caused not great number of metalheads that come to concerts. Internet caused media freebooting and they stopped buying cd even big bands, that is why for Russia there is no point in physical cd release, mostly digital music is popular.

entertaim.net: Let’s get back to your band. How will the new album sound? Are there any surprises or changes regarding the style or songwriting?

Kaira: I am sure, you will hardly name our new album predictable, every song gives its emotions and its own energy. We continue development of Groove Metalcore and we like it as we have found ourselves in it. The main in the new album is that each lyric is experience that we had and it makes the album real, not a legend. We have around us so many truths that we don’t want to conceal, we want to cry out. Of course, you can’t do with subtext, but double meaning always makes lyrics more interesting. You will hear more emotions and no static sound. Many people ask about slow ballads in the new album, and I can readily tell that we will present the ballads, they will be beautiful and cruel.

entertaim.net: Kaira, you are also a model, if I’m right and you like motorcycles and race cars? Is this correct?

Kaira: Yes! I like adrenalin and drive and hate dead points, slow cars and people who go with stream of commonness. I like to do everything I want, take everything that take into head. I build the world around me with my own hands, and cycle, cars and metal music help to reach the goals, but I think not the goals make me happy but the way to them, that is why everything is in full swing as I can’t live without goals. I am happy to say that we have bought a new motorcycle Yamaha Stratoliner S XV1900 and I feel now everything will be brighter.

entertaim.net: Right here one marketing rule is: Sex sells? How about Russia … there are lots of beautiful girls … you’re also the eye catcher of your band. How important is it to play with a sexual key stimulus? How important are sexy outfits especially for a female rock/metal singer?

Kaira: The point is that I can’t speak for everybody, it isn’t a goal for me, it’s just me every day, not only at the stage. We don’t point at sex in Metal, just we have it or not at all.

entertaim.net: What are the next steps for the band KAIRA? Shows in Russia, a tour etc.?

Kaira: We are recording the new album, shooting of new song video and professional promotion in European countries and the USA. Russian metalheads wait for the songs in Russian but we don’t put performance in Russia in a high position now because we change format into international.

Kaira: Thank you, Dennis … see you in Germany! 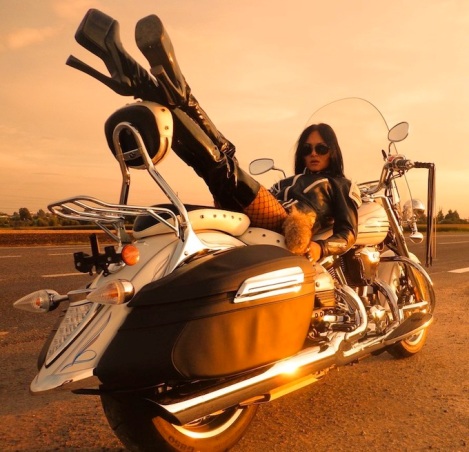