Danni Monroe rocks! The red-pink-haired front singer of The Dirty Youth knows how to party and to make a good show. Entertaim.net talks to the female hurricane about the tour with the Rasmus.

Photo by courtesy of The Dirty Youth 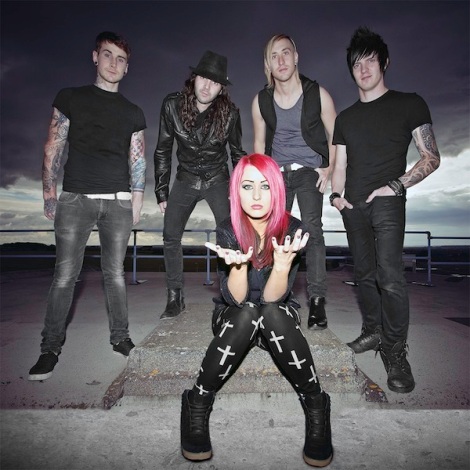 entertaim.net: Since you released „Red light fix“ and the single/video „Fight“ you guys have been busy playing so many shows. This November you’ll start a European Tour supporting THE RASMUS. Are you excited yet?

Danni: Hell Yeah … Cannot wait, I’m counting down the days. It’ll be amazing to see so many countries and meet so many people and of course get our music heard all over Europe!

entertaim.net: You’ll play in so many different countries but there are not many days off. Will you try to take some time for sight seeing?

Danni: Defiantly, if we get a chance as there’s so much travelling in between shows. I think we have 5 days off in 5 weeks!

entertaim.net: Is it sometimes hard for a girl in a nightliner just being surrounded by male people?

Danni: Sometimes, like when I have to chill out on the alcohol and cigarettes and they’re all raving it up! That can be hard at times but it’s what I have to do if I want to keep my voice.

entertaim.net: I guess you need much more space for clothes like your guys. Is it hard to get all your stuff back, especially if you go shopping in the cool cities where you play shows?

Danni: (laughing) You would think it was like that, they bring more clothes than me! I’ve stacked up on warm clothes for this tour as it’s going to be freezing. I’ve even invested in an Adidas tracksuit (laughing).

entertaim.net: How do you keep yourself in a good condition while touring? Healthy food or more liquor to kill germs?

Danni: Generally try to sleep whenever we can and Jagermeister usually kills off any nasty bugs. I’ve also had a flu jab this year so I am going at this fully prepared!

entertaim.net: What is the best part of touring?

Danni: Seeing the world, meeting new people and the best part is obviously getting your music heard by new people.

entertaim.net: Do you already write new songs for a second album?

Danni: Yes, were in the studio recording now, Exciting times!

entertaim.net: Apart from THE DIRTY YOUTH … do you actually have a personal favorite album at the moment?

entertaim.net: Okay … enjoy Germany and thanks for the interview.

Danni: We will! Thank you!